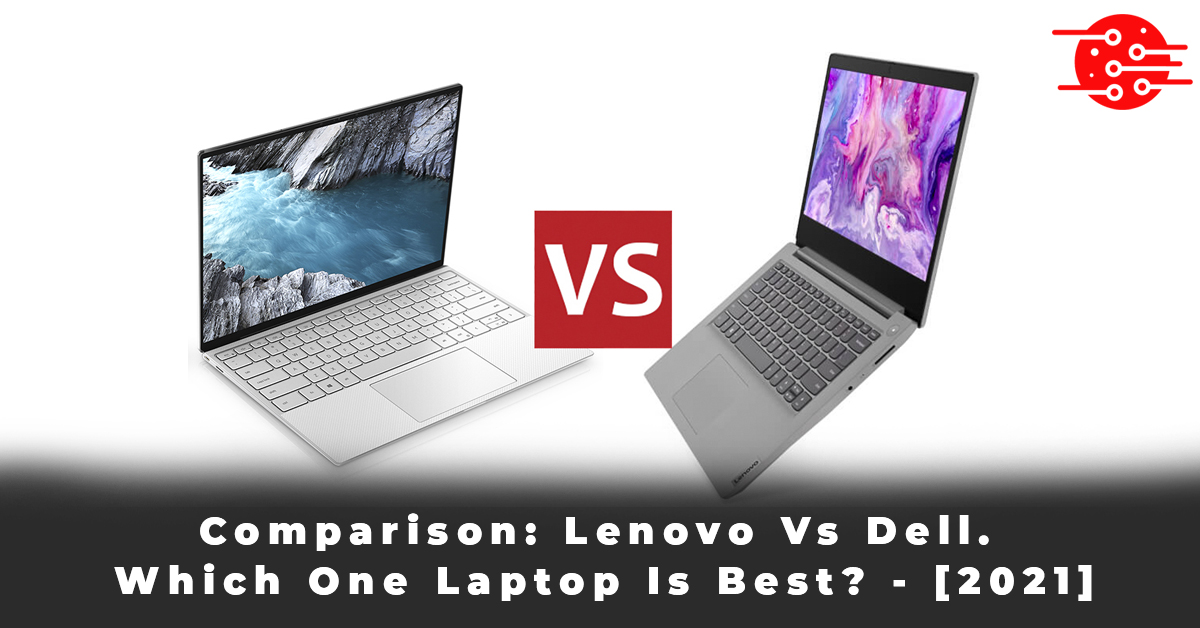 Will a Dell laptop last me longer or Lenovo? Does Lenovo offer better customer service than Dell? If those are the questions on your mind, you are in the right place. Here’s a detailed comparison of the brands to help you make better buying decisions.

Both Dell and Lenovo make a wide variety of laptops, so when someone asks if Lenovo or Dell laptops are better, one cannot always give an answer without knowing something about the consumer’s budget, requirements, or even personal preferences.

It’s also true that Lenovo sells more computers than Dell, though people shouldn’t just use popularity as a metric for making a purchase decision. Both individuals and companies should consider their unique needs and then shop around for prices on the specific models that meet those requirements.

In this article, I’m going to compare these two giant brands so that you can have an idea of what you need to look for when buying a new Dell or Lenovo laptop.

Unsurprisingly, Lenovo laptops top the list on most tech blogs. All you have to do is look at the review of models like the Lenovo X1 Carbon and Yoga 920.

Although this is not the first time that Lenovo will be leading the pack “between” 2013 to 2015, Lenovo recorded the highest vendor-based sales with the launch of ThinkPads and IdeaPads.

Dell is another major laptop manufacturing company across the globe. With recent products like Alienware, I’m sure it will appeal to every gamer and XPS series, such as the impressive XPS 9310. This Texas-based American multinational tech giant definitely knows how to make its customers happy.

Intel is the obvious choice for almost every Lenovo laptop. Most of Lenovo’s high-end laptops like the ThinkPad Carbon X1 and the Yoga 920 feature a 9th Gen i7 processor. This provides you unmatched versatility.

That’s because laptops can handle any task that comes their way. Yes, from graphic design to programming to gaming, they’re the professional’s laptop.

You can find i5 and i3 processors in mid-range laptops that cost between $ 600 and $ 700. Inexpensive laptops like the IdeaPads come with dual-core processors from AMD or Intel.

However, if you choose the latest IdeaPads, you will find a quad-core processor clocked at 2.7 GHz. This ample power for day-to-day browsing and entertainment purposes.

Dell also relies on Intel laptops. However, compared to Lenovo, you can find more AMD processors, especially cheaper laptops. With their Alienware range of laptops, Dell has made its way into the gaming world big-time. These laptops come with i7 or i9 processors.

When you need a laptop for video editing or other graphics-intensive tasks choose the Dell XPS, which offers powerful performance and can handle the most complex tasks like a pro.

The mid-range laptops from Dell are equipped with i5 and i3 processors and are ideal for business use. This is a great powerhouse for browsing, MS Word, accounting software, and even light games.

It is with cheaper Dell laptops that you will find more AMD processors. Though there are exceptions. The Inspiron series and Dell i3552-3240BLK feature Intel Celeron and Pentium Quad-core processors.

It’s true that this company has been around for a long time, but they have not been able to find better color options. Most Lenovo laptops come in black or silver. But yeah you can expect some better artwork and designs as compared to Dell. It is your choice now.

Dell has some of the best-designed laptops to offer. Yeah, it is true that the company focuses more on the build and performance than the looks. So if you want some really good-looking, out-of-the-world laptops, then Dell is not for you.

Dell has a lot of different color variants that Lenovo won’t offer. And some higher variants can have better drawings to show. However, don’t expect much artwork from Dell!

As one of the oldest and most trusted manufacturers of computers and PCs, Lenovo should provide good customer service as a mandatory option. And it does that completely. Compared to Dell, you can find more Lenovo call centers and most laptops offered by the company come with an extended warranty period!

It is one of the largest laptop manufacturers, so it has great customer service. These service centers are located in every corner of the world, making it easy to find the replacement part if you have a problem. But the price and discounts depend on the warranty period!

Lenovo is one of the oldest manufacturers of these items and brings the oldest, it keeps its price under the affordable range. While the cheapest one comes at $200, you can see the most expensive one range up to just $1200.

Now the reason is justified as well. Lenovo produces a significant number of models and it has a laptop in each category you want, be it gaming or notebook etc. Thus it has a variable yet affordable price range.

It is one of the most bought LSPs and PCs in the market. And it is for sure considered to be one of the toughest competitions to beat. Coming to the price, Dell has all the machines required to suit all applications and tasks.

And since it has a lot to offer the price is maintained too. The Dell company offers its cheapest laptop at a price of $200 which isn’t much. And the highest one can range up to more than $2000! Well going on the specifications, the price is completely justified.

Most high-end Lenovo laptops have an NVIDIA Quadro or NVIDIA GTX graphics card, which enables them to deliver eye-catching graphics that make games hyper-realistic. For the lower-end laptops, Lenovo has stuck with Intel Integrated HD Graphics cards.

To give you jaw-dropping graphics, Dell relies on NVIDIA graphics cards. This is an obvious choice for most laptop brands. Some of Dell’s high-end laptops also feature AMD Radeon Cards. So how do you pick?

Luckily, this does not complicate the buying decision too much. That’s because the AMD graphics cards also perform well.

Though for me, NVIDIA is always the go-to brand for a graphics card, AMD laptops are cheaper. So if you are on a budget, look for laptops with AMD processors and graphics cards.

Lenovo batteries have a longer lifespan. When fully charged, the battery lasts about 11 hours. Some models have an extended battery life of up to 30 hours.

Lenovo’s batteries are the best, and many don’t even need to be replaced often. A great brand if battery life and quality are your concerns. Lenovo also has an issue with “plugged in, not loading”. However, this error occurs less often. And it mostly happens in used or refurbished laptops.

Dell laptops typically have very low battery life. A typical fully charged Dell battery can last up to 2 hours. While other Dell batteries can last up to 6 hours. Also, some laptops have a working “plugged in, not charged”.

This requires replacing the battery or changing the adapter. And often the problem is not solved. Using an adapter other than the one specific to your model will also cause this problem.

Similarities Between Lenovo And Dell

When comparing the two brands, you will notice that the two have a lot in common due to the shared software and programs.

1.Both Use Fast Processors

Both Lenovo and Dell laptops use Intel processors in their system. The cheaper brands have a Dual-core processor while high-end laptops have a Quad-core and sometimes six-core processors.

With a budget of at least $200, you can easily purchase a Dual-core laptop from either Lenovo or Dell. However, you can still get high-end laptops that cost above $1200. The prices and specifications of both brands complement each other; this means that a $200 Dell laptop will have the same features as a Lenovo laptop that costs around that price.

3.Both Are Resilient And Durable

Both laptops can at least last a minimum of six hours when on a full charge. This is enough time for anyone traveling or a student to finish tasks from any part of the world. The two brands are highly reliable with an assurance of at least two years of great performance.

It is pretty clear from a comparison who should choose which brand. Dell laptops are great if you are looking for something that can handle very demanding programs and you want to buy one laptop that lasts for a long time.

However, they do come at a higher price point. If you’re willing to spend this, then a Dell is the better choice for you. When it comes to Dell vs Lenovo, price definitely has to come into the equation.

Lenovo also makes very high-quality devices, but the focus is on value. You won’t find better laptops for the same price as a Lenovo, but they don’t offer as much performance as a Dell.

These are built for casual use and they have an aesthetic to match. If you’re looking for a laptop that gives great value, then this is the better choice for you.

Is Lenovo a good brand of laptop?
Lenovo maintained its 5th place spot this year thanks to a wide selection of options and a handful of reliable products – most notably its ThinkPad line of laptops. Somehow, the company managed to improve upon the performance of what was already the best business laptop you can buy. But going too light on the innovation kept the company from rising higher in the ranks.
Why is Dell better than Lenovo?
Dell is more flexible with qualities like cross-compatibility between batteries of different models (like Latitude and Inspiron have the same battery), standard charger port so you can share charger of the same electrical specifications. HP and Lenovo have their own custom-shaped port. Dell Support is simply amazing. The person sitting behind that toll-free help number knows almost everything and gets you out of any situation.
Which is better Dell or HP or Lenovo?
Well, talking about Dell laptops, The build quality of Dell is much better than both HP and Lenovo. Their laptops are made bulky and the material used to build the Laptop is of High quality. Dell laptops are always expensive than both HP and Lenovo. Some people say they are overpriced but I think their laptops have much better build quality and features than HP and Lenovo and also they give excellent after-sales service too. So, in my opinion, it is worth it.